The following map types are available in MapViewer. 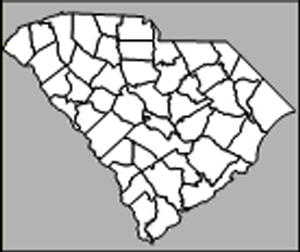 Base maps contain boundaries without any data representation. Boundaries can be polygons, polylines, and points. Base maps can be used with other maps to show features such as roads, streams, city locations, boundaries that have no data associated with them, and so on. You can overlay base maps on other thematic maps by creating the base map on a separate MapViewer layer. 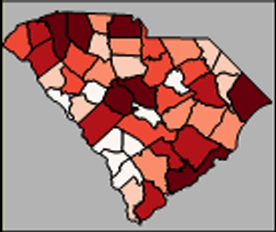 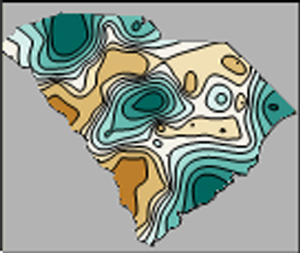 Contour maps interpolate from discrete data values to create a regularly-spaced grid. The grid is displayed as lines of constant data values. The areas between the lines may be filled with colors and patterns of your choice. 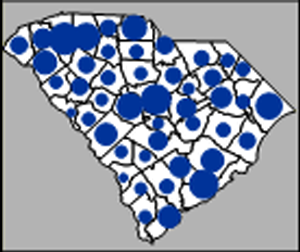 Symbol maps place a scaled symbol on an area, curve, or point location on the map. The symbols are scaled in proportion to the data values represented for each boundary object. The larger the symbol, the greater the associated data value. 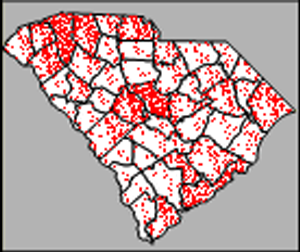 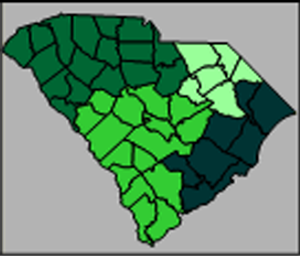 Territory maps allow areas, curves, or points to be grouped into territories by defining a grid or by hand selecting the areas for territories. All objects within a territory are displayed with the same color. Statistical information about the objects’ associated data is available in the Info page of the Property Manager 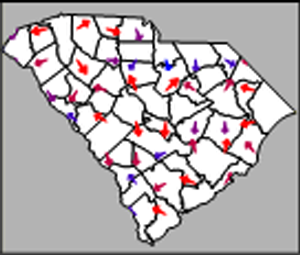 Vector maps interpolate from discrete data values to create a regularly-spaced grid. Vectors are drawn to show the direction and magnitude of the steepest slopes across the grid. 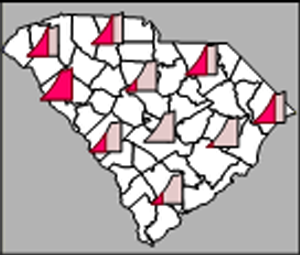 Line graph maps show line graphs of the data at each polygon, polyline, or point location. By looking at a single line graph, you can see how the individual data value relates to the whole data set. The Graph fill color represents the data value. 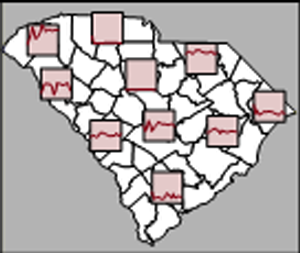 Multi Graph maps display unique line graphs or scatter plots for objects in a map. Each object has a unique XY data set. Multi-Graph data can be related, so you can compare values in different locations. 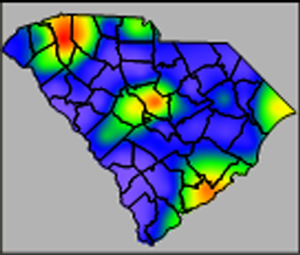 Gradient maps display a range of colors based on information from points, curves, and areas. The centroid of an area, all vertices of a curve, and center of a point are used as data point locations and the data value of the area, curve, or point is interpolated onto a grid. The gridded data values are assigned colors based on the selected color spectrum. The resulting map is a smooth color spectrum between the original data. 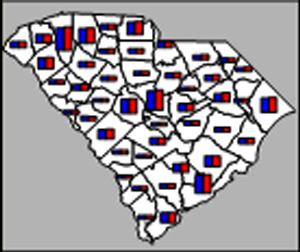 Bar maps can be drawn for areas, curves, or points, and are a way to represent several data values. Bar charts can show one or more variables where each variable is represented by a proportionally sized bar. 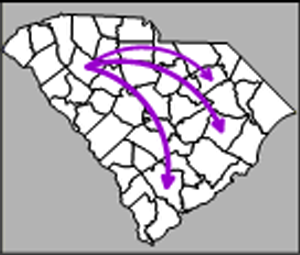 Flow maps scale the width of existing curves on the map or connect the centroids of boundary objects based on starting and ending locations. The curves are scaled in proportion to the data values represented for each curve. The wider the curve, the greater the data value associated with the curve. 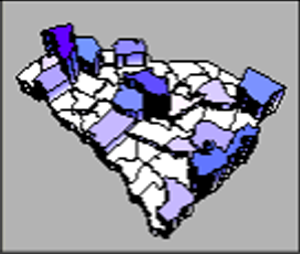 Prism maps draw each area, curve, or point as a raised prism, where the height of the prism is relative to the associated data value. Taller prisms indicate higher data values. Prism maps can be colored using the base map color, with interpolated color between minimum and maximum colors, or based on variable classification. 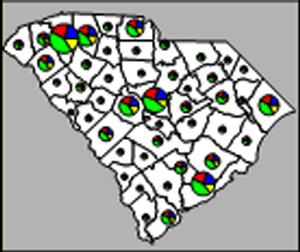 Pie maps can be drawn for areas, curves, or points, and are a way to represent several data values by drawing a proportionally sized pie chart for each location. Pie charts show two or more variables where each variable is represented by a proportionally sized slice of the pie. Within a single pie, the size of the slices gives you the relative proportion of the values for that particular area, curve, or point. The entire pie chart is sized in relation to the total of all variables for the boundary object, as compared to the totals of the variables for other boundary objects. 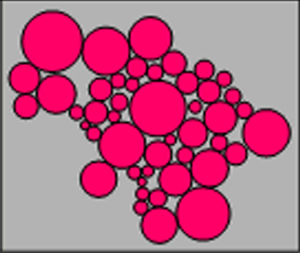 Cartogram maps display variables by varying area size. MapViewer's cartograms are Dorling cartograms. The areas are replaced by circles and the circles are scaled according to a variable. The maps can be controlled so that the circles do not overlap and are positioned as close to the base map's centroids as possible. 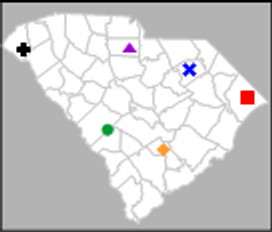 Pin maps draw points at particular locations on a map. Pin maps can be used to show locations, post labels, or display data values. Pin map point locations are based on XY locations, such as longitude/latitude or US 5-digit ZIP code or US City and State centroids. Pin maps can also use colors and symbols to represent data ranges or classes of data. Pin maps color code or symbol code locations based on the data value associated with pins. In addition, pin maps can be converted to other thematic maps such as symbol maps, pie maps, or bar maps.

What is a Thematic Map?