to arrange data according to rank in user-specified sort columns. Sorting rank is based on numbers, ASCII characters, and punctuation. You can sort numeric data, text, or mixed columns. 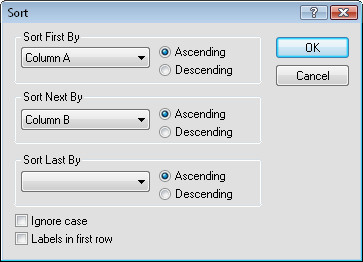 Use the Data | Data | Sort command to sort data on multiple columns.

The Sort First By option defines the primary column on which the rows are sorted. The positions of the sorted rows are determined by the Ascending or Descending rank in the Sort First By column. 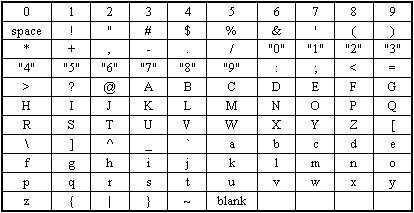 This ASCII table shows the sort order in the worksheet.

Because sorting is based on an ASCII table, upper and lowercase letters are treated differently. For example, "A" is sorted separately from "a." If the letters are to be treated as the same during the sort, check the Ignore case option. When this check box is activated, "A" is considered identical to "a" in the sorting rank.

The data set may contain text identifying the data in the column (header information) in Row 1. In this case, click the Labels in first row option to exclude the label row from the sort process.