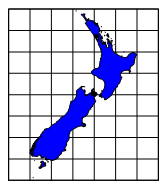 The New Zealand Map Grid projection is a modified cylindrical projection and is conformal. It is a sixth-order conformal modification of the Mercator projection using the International spheroid. Scale is constant along any given parallel and is highly accurate for New Zealand. Scale is the same in all directions near any given point. Distortion is minimal near 173° East, 41° South, and becomes more distorted the further from this location. This projection should only be used for large-scale maps of New Zealand and is not useful outside of New Zealand.