Querying is a useful tool for analyzing and editing specific parts of a map. After the Query command is clicked, the query is performed by selecting objects to include in the query, writing a query string to evaluate the objects, and selecting what action is performed to the objects returned by the query string. The Query Data command works similarly to the Query command, but the query is performed on the linked data. The Query Range command queries objects based on a specified distance from a single selected object. Since the Query Data command uses linked data, the Query Data command only works with boundary objects: polygons, polylines, and points. The Query and Query Range command can query all objects except text objects: boundary objects, rectangles, rounded rectangles, squares, ellipses, and circles.

This tutorial will show an example of each type of query command. First, open the HatchMap.gsm MapViewer sample file. The HatchMap.gsm file is a hatch map of the population of France by region.

First, we will perform queries on the plot with the Query command. If you haven't done so already, open the HatchMap.gsm sample file. The numbers on the image below correspond to steps 3 - 8 in the Tutorial. 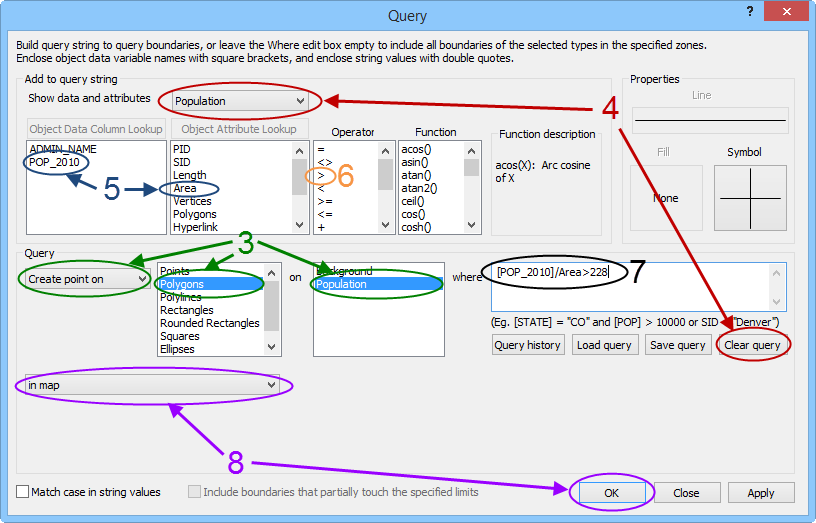 4.    If there is a query string in the where field, click the Clear query button. Next, make sure Population is selected in the Show data and attributes on list near the top of the Query dialog.

5.    In the Object Data Column field, double-click on POP_2010. Notice that [POP_2010] is added to the where field. Next double click the divisor operator, /, in the Operator field. Finally, double click Area in the Object Attribute field.

6.    Double-click the greater than operator, >, in the Operator field. Notice the operator is added to the query string in the where field.

Now there should be 11 points on the map, indicating the regions with population densities greater than 228 people per square mile. Next, we will change properties for the points in regions with fewer than two million people.

2    Click the Analysis | Query | Query command again. Now we will set up the query to apply properties to points within specific polygons. Select Apply properties to in the Query list. Select Points in the objects list. Select Layer #1 in the layer list, and click the Clear query button. The where field is left blank because the points referenced by it have no attributes or linked data to query.

3.    Now, in the in field, select in polygons, and in the second layer list, select Hatch. Select Hatch in the Show data and attributes on list at the top of the Query dialog.

It is important to understand how the query lists, object and layer selections, and separate where fields function. The first line in the Query dialog was applying properties to points on Layer #1. If the points had attributes or linked data, we could have further defined the point selection by adding a query string to the first where field. The second line of the Query dialog was refining the query to include only points on Layer #1 that were contained within polygons on the Population layer with populations of less than two million people. Query strings, object and layer selections, and the in field selection must be made correctly to get the desired results.

The Query Data command generates queries on linked data. In the following example, we will create a report for the four regions closest to the median value.

to open the Query Map Data dialog. Like the Query command, the query is phrased like a sentence: "Do this with # of objects closest to value/object."

2.    Select Create report with in the Action list, and type 4 into the number of object field. Select the median value in the objects closest to list.

3.    In the Limit objects to field, select Polygons.

A MapViewer Report window opens showing the query results. The query returns the objects with the four data values closest to the median value of 2,132,882 people. Notice that three of the closest values are smaller than the median, while one is larger. The query report includes the data value for the data column selected in the Data statistics list in the Query Map Data window. In this case, there is only one data column POP_2010. The query report also includes the object type, ID and attribute information, vertices, length, area, etc. You can edit the report directly in the report window. You can also save the report as a TXT or RTF file.

Next is a quick example of the Query Range command. We will use the query to show only regions that are completely or partially within 150 miles of the Centre region. A single object must be selected before using the Range command.

1.    In the Object Manager, click Centre to select the polygon that represents the Centre region.

to open the Query within Range dialog.

3.    In the Action list, select Show, and select Polygons in the next field.

4.    Type 150 into the Within field. The units of the Within field are set on the Units page of the plot properties. In HatchMap.gsm, the Surface distance units are Miles.

5.    Click the Include boundaries partially within range and Apply action to all visible layers check boxes to add check marks, and click OK.

Next to Tutorial Conclusion