Before we begin with the tutorial, let's consider the components of a MapViewer thematic map. To create a thematic map in MapViewer, you need both a base map containing boundaries and a data file containing the data you want to represent on the map. With these two components, you can create any of the thematic map types.

The graphic shown here illustrates the relationship between map boundaries and worksheet data. Notice that the primary IDs are displayed for each area on the map and are also contained in column A of the worksheet portion shown. 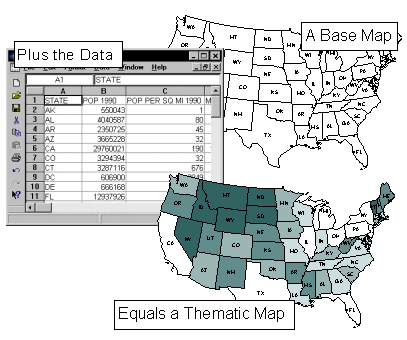 This graphic illustrates the relationship between the base map and the data when creating a thematic map in MapViewer. Each map area (the states) shows the primary ID (the two letter state designation). These primary IDs are also contained in column A of the data file shown here. The data are linked to the areas on the map to create the population hatch map shown in this example.