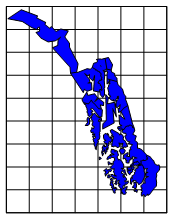 Offset by U = True

The Hotine Oblique Mercator 2-Point projection is a cylindrical, conformal projection. The scale is accurate along the chosen central line by the longitude/latitude settings below. This projection is useful for oblique areas (areas that do not follow lines of latitude and longitude), such as the Alaska panhandle because the central line does not have to follow a line of constant longitude. This projection is typically used with areas that are state or province sized and it is not suitable for maps of the world. There are two forms of the Hotine projection equation. The Hotine Oblique Mercator 2-Point projection is defined by selecting two points to form a line (Alternate A, Snyder).