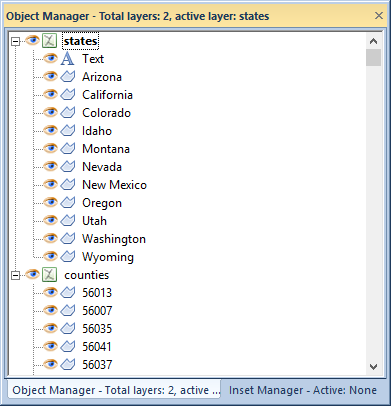 Opening and Closing the Object Manager

button in the title bar of the Object Manager to close the window.

button next to a layer name to expand the layer. When a layer is expanded the objects on the layer are shown in the Object Manager. Click the

Each row in the list consists of an icon indicating the type of object or layer and a text label for the object or layer. All objects and layers also have an eye icon that indicates if the object is visible. A fully colored eye

indicates that the object is visible and a partially transparent eye

. Locked layers and objects are indicated with a lock in the lower right corner of the eye

To change the display order of the objects with the mouse, select an object and drag it to a new position in the list above or below an object. The pointer changes to a black right arrow

if the object cannot be moved to the indicated location. The objects can also be moved with Arrange | Move | To Front, To Back, Forward, and Backward options.

See Object Property Report for more information on creating a report of the Object Manager information.